After living with the modifications I made to my amp for a few weeks now, I decided to make a couple of extra small changes.

I removed R17 completely which increases the gain of the Normal Channel even further. This also reduces the effectiveness of the Bright Switch as the Normal Volume control is increased. At full volume the Bright Switch will not have any effect, this should work rather well as by that stage the PI (Phase Inverter) is heavily clipping anyway and the Bright Switch was often too harsh at these high gain levels. This is essentially how the Top Boost channel functions too.

I am also replacing C7and C10 with 0.1uF (100nF) values. This is the original value of these capacitors in the amp, but I will use higher quality Mallory 150M capacitors. I had reduced these to 0.047uF during my last modification session because I had those values on hand at the time. I don't expect this to make much of a difference when playing clean but it may effect the gain structure when the amp is over-driven, especially as these feed the power section and the slightly lower frequencies that get passed along to the EL84 tubes can effect their clipping response.

I have also upped the value of the three grid stoppers to 68K. 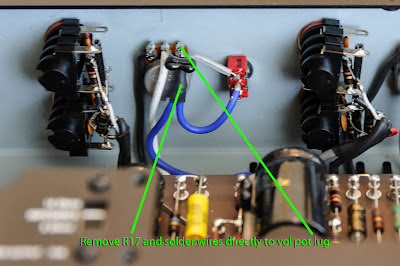 I really like the extra gain in the Normal channel, it makes it more flexible and does cut some of the brightness back from the Bright Switch so I have kept the original 220pF capacitor value. The changes to the coupling capacitors didn't really make a lot of difference which is what I expected, if anything the amp seems a little warmer sounding but its a pretty trivial difference.
Overall I'm very happy with the mods I made to the amp, they really are worth the effort and it doesn't cost much to change these components so I would recommend it to anyone with a hardwired AC15 or AC30 for that matter.
By Nik at 12:04 PM