I have created Version 2 of my Nikon D300 and D700 Adobe Lightroom (ACR) camera profiles. I think the Adobe Standard based profile (previously called Niks Default) now gives better skin tones than the earlier version and doesn't have the "yellow spike" that it suffered from.

In the crop below you can see how the Adobe Standard based profile (previously called Niks Default)  would blow out yellows and cause reds to look orange. Compare the the train doors and rear lights but notice that the riders jacket looks about the same in both versions. Right click on the image to download a larger version. This problem also showed up well in sunset photos where it would introduce yellows into the sky instead of oranges. 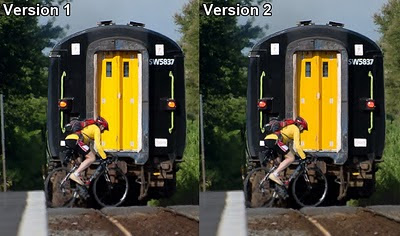